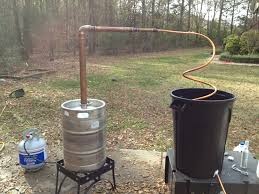 This is one commodity that causes discussion in what ever the time is. For preppers it falls into two categories. Barter and Medicine. I do not differ than anyone else. I stock it and make for those to reasons.

This week we’ll talk about the medicine side of things. We use alcohol in tinctures to make a more concentrated and longer lasting medicine. Today we buy our alcohol, but what about if the stores are not there anymore?

Distillation on the other hand is illegal in the United States. Punishment for producing distilled spirts

basically 10k and 5 years for each COUNT.

So what’s the herbalist, SHTF medic or village healer to do? Well First the legal talk
Disclaimer: this information is for provided for general information purposes only. The information in this newsletter/blog post does not constitute legal advice. Distillation of alcohol is illegal in the US and the Medic Shack takes no responsibility for anyone attempting to make their own and 1. Getting arrested or 2. Hurting themselves blowing themselves up or burning down their property.

Ok now that that is out of the way lets get down to brass tacks, Or copper sheet.

It is vital to have a good supply of clean and safe liquor to make medicines with. Bad liquor is dangerous and can kill you or your patients.

I prefer corn whiskey for my tinctures. Vodka or grain alcohol is perfectly fine also. Also brandy works very well. Bourbon Dark Rums and schnapps are not good choices. My rule of thumb is if it is clear its good to use.

So lets start at the beginning. The Mash or beer

This is my grandmothers straight corn whiskey

Yup. No sugar no corn syrup nothing but straight corn

Heat 5 gallons of mash water up to 165F. Turn off heat when target temperature is reached and stir in the 10 pounds of corn. Stir the mash continuously for about 5 minutes then stir for a few seconds every five minutes until the temperature drops to 152F. Once the target temp is met, stir in the malted barley.  Cover and leave it be for about 90 minutes, uncovering only to stir every 15 minutes or so.  At this point all of the starches should be converted into sugar. Leave it sit for a few hours or use an immersion chiller to cool the mash. At 70 degrees add yeast and aerate (by dumping back and forth between two containers) ,cap, and add an air lock. In a week or two fermentation will be complete. Leave it settle for another week and you’ll be ready to distill. Siphon into still. Do not pour. Make sure to leave yeast and other sediment behind. Also, never fill the vapor cone of your still with liquid.

There are just two rules: go slow, keeping the alcohol  coming out of the still at no faster than a drip a second, and use lots of jars or glasses to collect the distillation so that after your run, when your judgment is better, you can throw away what is bad and keep the good.

Turn on heat under the still. Start with a strong flame and if you are distilling in a water bath still. bring the water bath to a full boil. Once you become familiar with your still, you will get a sense of when the alcohol will begin flowing. From time to time, touch the copper tube close to the lid and also close to the condenser. The alcohol will begin flowing soon after the copper becomes hot where it enters the cooling water. I often notice steam beginning to rise from where the copper enters the water just before or just as alcohol beings to flow. It is especially important not to allow the still to get too hot. The ideal speed is no greater than 1 drip a second.

Your nose is what you use to separate the “run” into its component parts: the foreshots, the heads, the heart, and the tails. The heads and the tails may be saved to redistill. The hearts are consumed, though depending on taste, they may be diluted with water first. There isn’t a clear separation between the different parts of the run. The art and craft of distilling is how the distiller makes the call using his or her nose.

Heads: The heads contain a mix of the undesirable alcohols and an increasing percentage of ethyl acetate, which is one of the important flavor compounds in grape wine, and methanol. Most commercial distillers save the heads to run through the still a second and third time. You may want to save them, toss them, or add at least some to the hearts. There is no fixed rule.

Hearts: The hearts is the main run of ethanol. The smell is bright and fresh and is strongly evocative of the underlying fruit or herb in fruit wines and fruit and herbal macerations. As you maintain the still at a steady slow drip you will find that you are slowly increasing the temperature of the still. One drop every second, or even every two or three seconds is what you are looking for from a small still. Collect in small glasses, like shot glasses.

Tails: At some point the flavor changes, becoming more dilute (more water vapor is condensing) and the smell is less pleasant. At that point you are sliding into the tails. The tails contain a high percentage of water mixed with ethanol and fusel alcohols.

If you smell any of the undesirable alcohols of the foreshots and heads, you can leave the alcohol in a glass container with a cheese cloth lid. After a few days the acetone and methyl alcohol remaining will evaporate. Changes do take place within the glass. Letting the alcohol rest for a few months mellows the drink and reduces any metallic tastes picked up from the still.

Commercial distillers focus flavor by running the alcohol through the still two and three times. Each time through the still a more refined cut of foreshots, heads, and tales is made producing an ever cleaner hearts. The trouble with redistilling on a home scale is that one has to start with an awful lot of alcohol to get enough to run back through a still, and then heating a pot filled with now highly flammable alcohol — as opposed to heating wine in a first distillation — clearly poses safety issues. It isn’t something I’d do in my kitchen nor is it something I’d do over or near an open flame. My advice is to be methodically slow about your primary distillation, gather the run in lots of small containers so you can make the cleanest, brightest mix possible, and be happy with what you have achieved.

The following is a list of the temperatures at which the different alcohols boil at sea level. In the real world liquids evaporate at temperatures below their boiling point. For example, water evaporates out of ice and snow and rain evaporates off of sidewalks even on cool days under cloud cover. Therefore, there are no clear demarcation points. As the acetone boils out of the wine at 134 degrees, ethanol and water are evaporating too, even though they are below their boiling temperatures. But the steam rising from the still at 134 to 147 degrees is richer in acetone and methanol than in ethanol, so these are the foreshots.

A pot of boiling waters boils for a long time before all the water evaporates. Thus, it isn’t as if your wine reaches the boil. What you can see from this table, though, is that to isolate the acetone and methanol, you want to go very slowly so the temperature of the wine creeps up to the 172 degrees of the ethanol, the alcohol that is at the heart of the run. If you go slowly, then it will be clear where the foreshots and heads separate. Everything above ethanol (boldface) listed below is the foreshots and heads; ethanol is the desirable middles; and everything below the Ethanol is the tails.

All tinctures are extracts but not all extract are tinctures. We’ll talk about using the alcohols you made for making them. I use this formula for making tinctures?

Fresh Herb
•Finely chop or grind clean herb to release juice and expose surface area.
•Fill jar 2/3 to 3/4 with herb. ~ OR ~ Fill jar 1/4 to ½ with roots.
•Pour alcohol over the herbs. Cover completely!
•Jar should appear full of herb, but herb should move freely when shaken.

Dried Herb
•Use finely cut herbal material.
•Fill jar 1/2 to 3/4 with herb ~ OR ~ Fill jar 1/4 to 1/3 with roots.
•Pour alcohol over the herbs. Cover completely!
•Roots will expand by ½ their size when reconstituted!

Also I use different strength of alcohols depending in the state of the herds.

40% – 50% (80-90 proof vodka)
• “Standard” percentage range for tinctures.
• Good for most dried herbs and fresh herbs that are not juicy.
• Good for extraction of water soluble properties.

85% – 95% (190 proof grain alcohol)
• Good for gums and resins.
• Extracts aromatics and essential oils that are bound in the plant and do not dissipate easily.
• The alcohol strength can produce a tincture that is not quite pleasant to take.
• Often used for drop dosage medicines.
• Will totally dehydrate herbs.

The best resource for this part is Cats book Prepper’s Natural Medicine: Life-Saving Herbs, Essential Oils and Natural Remedies for When There is No Doctor

During this weeks show we will share some of our recipies for making medical tinctures.

Alcohol is a vital part of prepper medicine. One needs to come to terms with their own religious political and personal beliefs. It is not the realm of the Medic Shack to tell people to change personal opinions. I feel that the best extract come from alcohols.